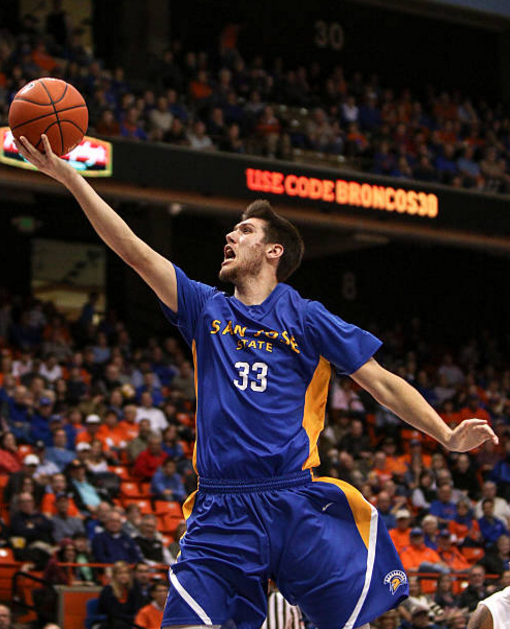 The Green Bay Phoenix have landed another high quality Division I transfer.

Cody Schwartz, a 6’8” forward from nearby De Pere, announced on Twitter Thursday afternoon that he is transferring to Green Bay. He played the past two seasons at San Jose State and will have two seasons of eligibility remaining after sitting out next season due to NCAA transfer rules.

“Today I announce that I will be transferring from San Jose State and will continue my schooling and my basketball career at UW-Green Bay,” he wrote on Twitter. “I thank the coaching staff for giving me the opportunity to play at SJSU and for helping me progress as a player and a person. I thank all the fans for the support you have given me throughout my seasons here. Finally, thank you to all the teammates I’ve had these past two years. I appreciate all of you and have a lot of great memories from you guys.”

A 4-star recruit according to ESPN, he ranked as the 35th best power forward in the country and the 6th best player in Wisconsin’s impressive 2015 class. That class has two players currently in the NBA – Diamond Stone and Henry Ellenson – as well as two more playing large roles at Marquette (Matt Heldt) and Wisconsin (Brevin Pritzl).

After receiving interest from Marquette, Creighton, and Nebraska amongst a host of other schools in high school, he eventually chose to attend San Jose State over scholarship offers from Green Bay, Northern Iowa, and Toledo.

His career got off to a hot start in 2015/2016 when he appeared in all 31 games as a true freshman starting all but five games for the Spartans. That year he averaged 7.0 points and 2.7 rebounds in 24.1 minutes per game and also knocked down 52 three pointers, most among all freshman in the Mountain West Conference, connecting on 34.0% from beyond the arc.

This past season he played in all 30 of the team’s games and made 7 starts but saw his playing time basically cut in half and his production suffered. He averaged 3.8 points and 1.2 rebounds in 12.8 minutes per game as a sophomore. He improved his three point shooting to 38.2% this year for San Jose State, who finished 14-16 overall and 7-11 in the Mountain West Conference.

Schwartz will join former Bay Conference rival Sandy Cohen as the two Division I transfers that are part of the Phoenix massive eight player 2017 incoming class. Others in the class include JUCO transfers Paul Turner and Sukhjot Bains as well as incoming high schoolers Will Chevalier, PJ Pipes, Trevian Bell, and Manny Patterson.

Barring any other roster defections, the Phoenix roster seems to be set as all 13 scholarships have now been filled for the 2017/2018 season. Green Bay returns just five scholarship players from last year’s team that finished 18-14 overall and lost in the first round of the CBI last month.