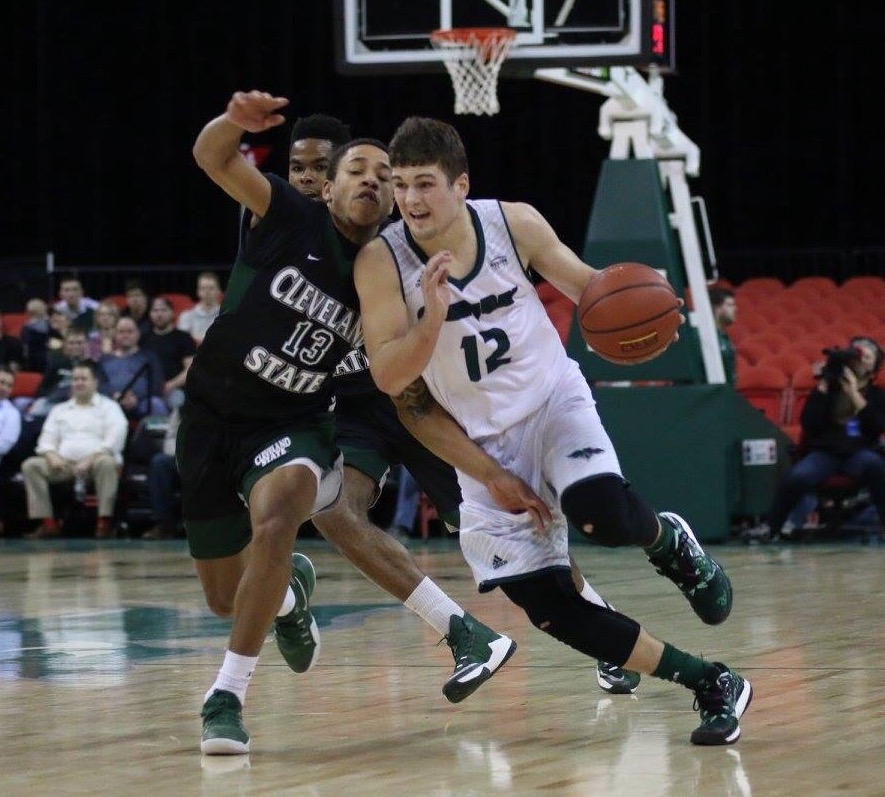 The Green Bay Phoenix could be without their top two point guards when they open Horizon League Tournament play Sunday evening at Joe Louis Arena in Detroit.

Freshman phenom Trevor Anderson has missed ten straight games with a back injury after starting the first twenty of the season. He suffered the injury 11:04 into the first half in a win against Cleveland State back on January 23rd and has not appeared since. Sources at the time told Scott Venci of the Green Bay Press-Gazette that Anderson was suffering from back spasms.

The 6’1” Anderson had played more minutes than anybody on the roster up to that point and still leads the team at 28.5 minutes per game. He also leads the team in assists at 2.7 per game.

Head coach Linc Darner has not ruled out Anderson for Sunday’s second round game against UIC. Anderson took part in the team’s shoot around this past Sunday afternoon before Green Bay’s 89-82 victory over Detroit Mercy at the Resch Center before returning to street clothes. He is still considered day-to-day.

To make matters worse, senior Warren Jones went down with a head injury just two minutes into Sunday’s game against Detroit Mercy. The 6’3” Jones had been one of Green Bay’s best players during the conference season scoring 11.3 points and dishing out 2.8 assists in the 17 conference games prior to Sunday. He scored a season high 22 points and went 5 for 7 from beyond the arc in last Tuesday’s 87-79 victory at UIC.

“We had four guys at the start of the year, to be down to two right now…it’s part of the game,” Darner said Monday on Inside Phoenix Basketball on WNFL. “To have great seasons and to make runs at the tournament you have to have everyone healthy, you stick with the same starting lineup every game and the same rotation. I think last year once we got into December our lineup stayed pretty consistent. This year it’s been a shuffle in and out.”

“Hopefully everybody will come and we’ll have great consistent play for hopefully three games here.”

The other two ball handlers on the active roster are 6’4” senior Tevin Findlay and 6’5” freshman Kameron Hankerson.

Findlay has started all ten games in Anderson’s absence averaging 5.6 points, 3.0 assists, and 2.7 rebounds in 19.5 minutes per game during that stretch.

Hankerson had an impressive weekend last week in the two games against Michigan schools at the Resch Center scoring 8 points in 9 minutes against Oakland on Friday and a career high 13 points in 20 minutes against the Titans on Sunday.

“We were struggling to score against Oakland and he came in and hit three shots and did a really good job in that game,” Darner said. “Then when Warren went down I really thought he came in and he played really well. He made some shots, made some great passes up the floor, and went to basket and finished some.”

The freshman from Novi, Michigan could play a significant role at the conference tournament near his hometown as the team is needing ball handlers. Besides Findlay and Hankerson the only other point guard on the roster is Avery Brown who is redshirting this season, though Khalil Small can bring the ball up the floor if necessary.

Up to this point of the season the rest of the roster beside the point guard position has remained relatively healthy, though several players have missed at least one game including Kerem Kanter, Charles Cooper, and Jamar Hurdle.

Darner will try to keep the players fresh this week ahead of Sunday’s do-or-die conference tournament game against UIC. Both Anderson and Jones’ status will be worth keeping an eye on as the week progresses as both figure to be game time decisions.

“Knock on wood – we cannot have another injury,” Darner said. “We can’t go very long in practice. Maybe a lot of five on 0, a lot of shooting, a little bit of five on five here but right now we can’t afford any kind of injury.”