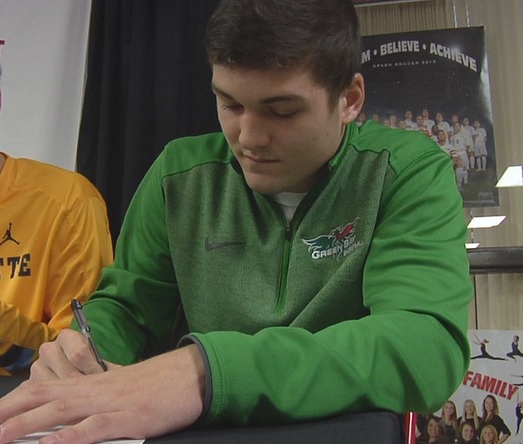 Green Bay’s 2016 recruiting class has signed on the dotted line.

The Phoenix received signed National Letters of Intent from Trevor Anderson and Kam Hankerson on Wednesday, the first day of the NCAA's early signing period.

“We wanted to identify individuals who will represent our program the right way, with that coming both on the court, in the classroom and around the community," head coach Linc Darner said. "Both Trevor and Kameron come from outstanding families and we look forward to them being role models for us and representing Green Bay basketball with class. We feel we have found the right characteristics combined with the talented basketball skill set in these two young men."

Hankerson, a 6’4” wing from the Detroit area, announced his commitment to the Phoenix in mid-August after taking an unofficial visit to the UWGB campus. He was offered a scholarship by head coach Linc Darner during the visit.

He’s considered an athletic double threat player that can accelerate at will to the basket and has the ability to dribble, pass, and shoot. According to his Hudl profile he has a 39” vertical leap to go along with his 6’4”, 180 lb frame. He considers his ability to drive to the basket as the best aspect of his game right now.

“We’re very excited Kameron has decided to join our program,” Darner said. “He’s going to be a very versatile player for us, as he brings in great size at the guard position. He’s going to continue to improve his skill set as a player and we look forward to watching him grow.”

Hankerson was named honorable mention all-conference after averaging 9 points, 5 rebounds, 4 assists, and 2 blocks per game this past season as a Junior. He helped lead Novi to a 12-9 overall record, including 7-3 in the Kensington Central Conference. He is the captain of his high school team and plays point guard as well as out on the wing.

"Kam is one of the most coachable kids I've ever had to chance to coach,” Novi head coach Brandon Sinawi told PrepHoopsMichigan.com. “He's got a relentless work ethic and has put in a ton of work this off-season to fine tune his game."

Hankerson is also learning to play more of a perimeter game and has adjusted well. He says he has been working on shooting the ball with proficiency this offseason as well as shooting from the outside.

“I feel comfortable (shooting 3s),” Hankerson said, “but I just need to continue to work on it.”

Prep Hoops Michigan notes that he “has a nice stroke from deep, crazy 40 inch vertical bounce, and college ready size.”

He seems like an ideal fit for the up-tempo offense and full court defense that the Phoenix will be running under Darner that requires high-level athleticism. If he is able to develop an effective outside shot, he will be an even bigger asset for the Phoenix.

“The process was exciting and difficult together. (Coach Darner) trusted me enough as a player and individual to offer me a scholarship right off the bat,” he said. “Once I made my decision it was a huge relief and I am looking forward to the opportunity to play at Green Bay.”

Flying under the radar, Hankerson burst onto the recruiting scene this summer going from a relatively unknown to ranked as a top 20 prospect in Michigan’s 2016 class. The scholarship offer from Green Bay was his first official offer, though he was receiving interest from UIC, IPFW, Central Michigan, and Northern Illinois, among others.

“His upside has him just scratching the surface of the type of player he can be,” Darner said. “We expect big things from his high school team this year and he will be a huge part of their success. Kam will only get better and we are excited for his potential and future.”

As for Anderson, it was clear he was the Phoenix top target from the get-go as Anderson was the first player Darner offered a scholarship to less than a week after landing the Green Bay head coaching job.

He has been named Player of the Year in the Wisconsin Valley Conference all three years of his high school career, including this past season as a junior when he led the Panthers to a 27-1 record and WIAA Division I state championship. SPASH beat Germantown in the championship game, 67-51, behind a game high 25 points from Anderson.

The WisSports.net scouting report on him says Anderson is a “quick, skilled guard who can stroke long-range jumpers or beat defenders off the dribble” and that he’s an “extremely accurate foul shooter who can put up points in a hurry.”

He seems to be a perfect fit for the high octane, fast-paced offense that Darner plans to run at Green Bay that relies on athletic players that are capable of scoring lots of points.

“To come in right away and land a player of his caliber was a huge get for us,” Darner said. “We’re excited to have an in-state quality individual like Trevor becoming part of the Green Bay Basketball family. He’ll bring a leadership quality to our program, along with a strong will to win. His success at both the high school and AAU levels speak for themselves.”

“We’re very excited with our two new additions for the program next year, Darner said. “We identified an area where we needed to improve and we feel we have accomplished that with this class. Both Trev and Kam can score and pass the ball at a high level and they will make us a better team early on."